Since the very first time i heard something from THERE ARE NO BIRDS HERE, i could very much relate to the sounds and the atmospheres they created in my mind. I’m sure it is also related to the project’s name and aspects of the layout, they have touched me and i am glad that they did. There are sound landscapes into which i can dig my roots, that can become something like a home. For lost seekers like me, those terrains are important, even when they are partly hostile, polluted and not inhabitable for long stretches of time. All of these aspects are also crucial for my own sound making/production/work from the very beginning. My first project was called TOTSTELLEN (ger. dead places, but also describing zones untouched/spoiled by humans, or the areas a radio signal does not reach) and now, since i live in finland the project is called COLDSORE, which is mostly describing the effect of living in KALTLAND (ger. cold country, a common term for germany used by people who don’t like it there). These ‘sores’ can be obtained everywhere and by everyone, nation-states are polluting the world with their structures all over the world and i think what is common for releases on TOTES FORMAT are the environmental factors, not just field recordings, but the creation/description of worlds, existing or not, in sound: distorted, filtered, mangled, ruined and beautifully broken. The inspiration stemming from environs, a world we have inherited and will leave for others to deal with. One title of a previous THERE ARE NO BIRDS HERE release is ‘Another Ruined landscape’ and that just fits so well with the environmental disaster motive of so many COLDSORE releases.

‘We are not the least afraid of ruins, we carry a whole new world in our hearts.’  B.Durruti

I’m very glad to present you a split-release of THERE ARE NO BIRDS HERE and COLDSORE, which combines recordings, that coincidentally and almost magically reflect each other in their compositions. It has baffled me when i first listened to the TANBH recordings that i have been sent for this release. Patterns re-occur in our tracks, field recordings have similarities, no matter that some are recorded on a shale beach on the east coast at felixstowe and others in a wintry (-24) forest camp protesting a planned uranium mine in Sápmi (lapland). It does not matter that some recordings are the bubbling of a  ‘seriously hot veggie lasagne’ in suffolk or me creepy crawling through half flooded drain tunnels under a soon to be gentrified ex-industrial area in helsinki. We create/destroy worlds, we enter and leave them behind. In our sounds we combine utopia and dystopia. In the way we act and think we decide how we want to live.

The download contains the audio files in mp3VBR320 as well as in wav24bit format, plus  the artwork in RGB/jpeg format.

THERE ARE NO BIRDS HERE / COLDSORE (dowload).zip 646 MB 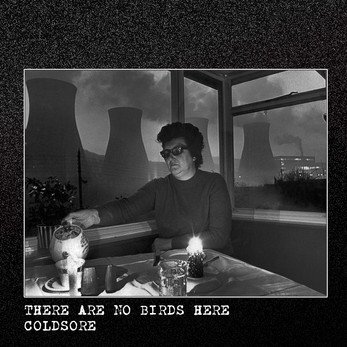